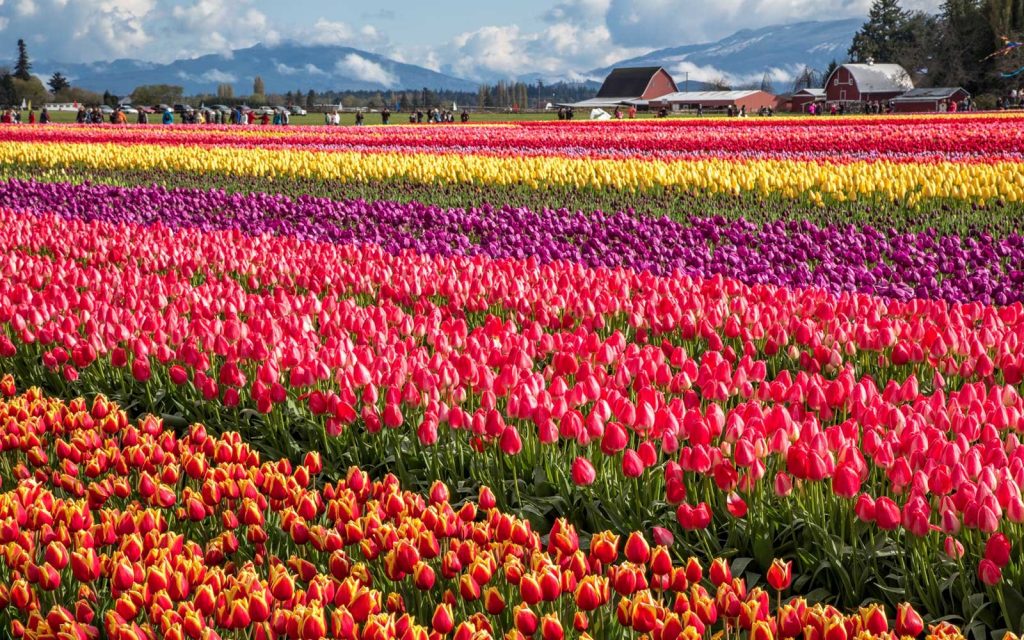 Tulip is the genus name for 100 species of flowering plants belonging to the Liliaceae family. The Tulip originated in central Asia, growing wildly in the Pamir mountain range and the Hindu Kush Mountains and steppe in Kazakhstan. The Netherlands is famous as a tulip flower country. Tulips are also national flowers of Iran and Turkey.

Tulip is an annual plant with a tuber height between 10 – 70 cm, the leaves are waxy, narrow-shaped elongated green bluish shades, and the flower is a large size consisting of 6 strands of crown leaves. The result is a single coloured flower, red, orange, yellow, green, blue, purple, or a wide range of color combinations and gradations. Tulips produce dried round-shaped seeds that are wrapped in dry capsules.

As with roses, lilies, orchids and peonies, tulips are the most widely cultivated flower plants of mankind.

1. Single Early (the crown leaves in a layer, flowering earlier)

Flowers only have 6 crown leaves. Flowering in early April. This type is descended from the type ‘ Duke Van Thol ‘. Plants tend to be short, the height of the plant is about 20-30 cm. Examples: ‘ Apricot Beauty ‘ and ‘ Christmas Dream. ‘

Flowers have more than 6 crown leaves but fewer numbers than the Double Late type. The plant height is about 20-30 cm. Durable flowers and strong stems. Flowering in early April. It is a descendant of the ‘ Murillo ‘ tulip with white flowers, consisting of 120 cultivars. Examples: ‘ Peach Blossom ‘ and ‘ Monte Carlo ‘.

The type developed from the species Tulipa Kaufmanniana from Turkestan. This type of Tulip flowering very early, in Washington, D.C. is sometimes already flowering in early March. The trunk is short, the flowers are wide open in the sunlight so it looks like a hexagon star. Flowering in early April. The plant height is about 10-20 cm.

The type that is easy to breed, is a hybrid of the various tulips originating from central Asia. Flowering around early April. The plant height is about 25-51 cm. Example: ‘ Purissima ‘ (white) and ‘ Sweetheart ‘ (yellow with white on the edges of the crown leaves).

Blooming tulips are a bit slow

This type is the result of Single Early hybrid with slow flowering types. The flower shape of the egg round is typical of Tulip, the trunk is strong and flowers can endure bad weather conditions. This type is widely used for cut flowers. The plant height is about 25-41 cm. Flowering in mid-April. These cultivars have a wide variety of colors, such as ‘ Negrita ‘, ‘ Kees Nelis ‘ (a mixture of red and yellow), ‘ White Dream ‘ (white), ‘ Prominence ‘ (red), ‘ Cairo ‘ (brown), ‘ Zurel ‘ (a mixture of purple and white), ‘ Gavota ‘ (dark red with yellow edges). One of the cultivars is using the name of a city in Indonesia which is Tulip ‘ Makassar ‘ yellow color.

This type was only known after the 2nd World War, a hybrid result between the large and ‘ Darwin ‘ Tulipa fosteriana. This type has a large interest rate compared to other types of tulips so it is often planted in flower gardens and produced massively as cut flowers. The cultivation is easy, has strong rod and virus attack resistance. The plant height is about 30-51 cm. Flowering in mid-April. The color variations of flowers are not too much, such as: ‘ Pink Impression ‘ (pink), ‘ Apeldoorn ‘ and ‘ Oxford ‘ (red). In addition, there are also other colors belonging to the descendants of ‘ Apeldoorn ‘ and ‘ Oxford, ‘ such as ‘ Golden Oxford ‘ (amber), ‘ Blushing Apeldoorn ‘ (yellowish orange), and ‘ Oxford Elite ‘ (orange with yellowish edges).

It is developed from Turkestan’s Tulipa greigii species. The stem is sturdy, a medium-sized flower that is wide open in the sun shows the base of the old color to black. The leaves are distinctively patterned like stripes or shades of purple. Flowering in early April. The plant height is about 20-30 cm.

All cultivars of this type have a long and strong stem. This type is a collection of types such as ‘ Breeder, ‘ ‘ Darwin ‘ and ‘ Cottage ‘ whose distinctive features have been lost as a result of hybridization. The plant height is about 37-76 cm. Flowering in late April. ‘ Ile-de-France ‘ is one of the cultivars of this type that is flowering much faster than those of an earlier flowering. Examples: ‘ Pink Diamond ‘ (pink) and ‘ Queen of Night ‘.

This type has a title of Peony Flowered Tulip because it has flowers like peony flowers. The flowers are large with layered crown leaves. This type should be planted in a protected place because the large flowers do not withstand heavy rains and strong winds. The plant height is about 30-41 cm. Flowering in late April. This type has only a few cultivars, such as ‘ Angelique ‘ (pink White), ‘ Mount Tacoma ‘ (white), ‘ Ice Cream ‘ (the bottom of the pink, white top).

This type of stem is long and has flowers with the edges of the crown leaves that are torn and pointed like lilies. In ancient times, Tulip has a form of flowers like this. It originated from the species Tulip acuminata but has a strong stem. Popular as cut flowers. The plant height is about 36-76 cm. Flowering in late April. Example: ‘ West Point ‘ (yellow), ‘ Ballerina ‘ (orange), ‘ Marilyn ‘ (white with red brush strokes).

This type has the petals of the edges such as decorated crystals or tassels. Flowers look very beautiful and durable. The plant height is about 20-76 cm. Flowering in late April. Most tulips are a mutant of the Single Late. Tulip ‘ Crystal Beauty ‘ with red flowers is a mutant of ‘ Apeldoorn ‘ which forms a crystal-like decoration on the edge of the crown leaves. Tulip ‘ Barbados ‘ has a crown-leaf edge with decorations such as sharp tassels, while the crown-leaf edge of Tulip ‘ Royal Sphinx ‘ only has a tassel-tassel decoration very little to almost invisible. Other examples: ‘ Fancy Frill ‘ (pink) and ‘ Hamilton ‘ (yellow).

This type of Single Late family has a green line on the leaves of the crown that starts from the base of the flower to the top edge of the crown leaf. Old and flower crops are often used for cut flowers. The plant height is about 41-61 cm. Flowering in late April. Examples: ‘ Spring Green ‘ (white striped green) and ‘ Greenland ‘ (pink striped green).

This type of descent from Darwin that changes its color is caused by several types of viruses. In the beginning, people did not know that colors that were fantastically like brush strokes were caused by viruses, so this type of Tulip traded at an insanely priced time in the 17th to 18th centuries. The original Tulip Rembrandt was no longer there and replaced the disease-free Rembrandt type. Flowering in late April. Cultivars are similar, for example: ‘ Bizarre ‘ and ‘ Ice Follies. ‘

This type is known from the crown leaves similar to poultry feathers. The 99% Parrot type was a change from other types of tulips. It is said that there is a theory that the leaves of the crown like this are due to imperfect separation of crown leaves. The type now has a strong stem, while the type that existed in ancient times had a weak stem. The color can be different, but in the middle of the crown leaves there must be green spots. This type is highly vulnerable to bad weather and should be planted in protected areas. The plant height is about 31-41 cm. Flowering in late April. Examples: ‘ Flaming Parrot ‘ (yellow and red streaks), ‘ Estella Rijnveld ‘ (mixed in red and white) and ‘ Blue Parrot ‘ (dark blue Keungu-unguan).

Tulips can not live in the outdoors of the tropics because it requires low temperatures in winter to be able to grow. Tulips can be forced to bloom faster than normal if placed in a place where the temperature is set to be higher.

Tulips can be planted in two ways, using bulbs or seeds. Tulips planted from the tuber take a year to produce enough flowers, while plants planted from seeds take between 5-7 years to bloom.

The flowers that have been finished bloom must be cut to get the tuber. According to the results of studies that apply only to tulips, if when the flowers have not bloom the bottom of the flower buds are pierced to the translucent with needles (eg sewing needles), ethylene gas will be produced by the injured flowers so that the blooming period of flowers becomes Longer. The same treatment if done to flowers that have bloom causes the blooming period to be even shorter.